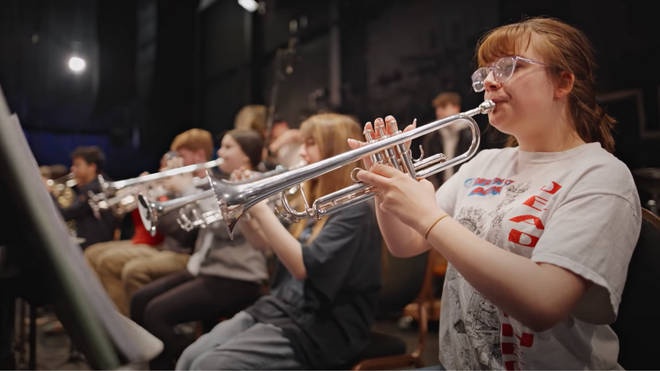 An orchestra of young musicians have published a masterful take-down of a car company, in response to its “tired” stereotyping of youth music-making.

Last week, the musicians released a video titled ‘An INFINITY Of Young Talent’, which references ‘Infiniti’, the luxury division of the car company, Nissan.

“Quiet the chaos in style,” reads the ad’s description; the ‘chaos’ refers to the young musicians depicted in the video. Watch said chaos below...

The advert portrays a youth orchestra playing Richard Strauss’ tone poem, Also sprach Zarathustra. However, the children seen in the video are in fact not playing, but miming along to a performance by an adult orchestra who had purposely been playing the piece badly.

In the advert, a model makes a negative face while listening to the music, rolls up the window to tune out the music, and drives away from the orchestra.

The comments section below the video is understandably filled with confused viewers, many of whom find the advert unnecessarily “mean”.

Most jumped immediately to the young musicians’ defence saying, “I want to hug everyone of those kids and encourage them any way possible.”

Another commented, “Ouch! It’s not the kids playing the music that’s intolerable, but the attitude of the adults that feel the need to insult beginner instrumentalists. How disappointing!”

One viewer even went as far as to say, “Infiniti/Nissan should donate all the (measly) profits selling this car to band programs across the country as a form of reparations.”

Another suggested, “you could have done this commercial in reverse where [the woman rolls] down the window in order to hear the music. Then you wouldn’t have ignited the entire music education teaching base in a rage. Same message, not insulting.”

The New Brunswick Youth Orchestra however, won the Internet, with their response to the controversial advert. Watch below.

In their video, the Orchestra’s CEO, Ken MacLeod, is seen opening a door to a concert hall, where the orchestra’s musicians are playing Strauss’ tone poem.

MacLeod asks the viewer, “Have you seen the new Nissan-Infiniti ad? Can you imagine? A big company like that couldn't find a youth orchestra to play the music.

“They should have called us. The New Brunswick Youth Orchestra.”

MacLeod continues, “In our experience, all kids have talent and can shine on any stage,” taking a hit at the car company’s marketing decision.

In response to an email from CBC, a spokesperson for Infiniti, Didier Marsaud said they had seen the orchestra’s response and thought it was “amazing”.

“We love that the conversation of music education is being spotlighted,” Marsaud added.

Founded in 1965, the New Brunswick Youth Orchestra has trained some of Canada’s best musicians for almost 60 years. The orchestra is made up of around 80 musicians aged 11 to 24, who come from all over the eastern Canadian province of New Brunswick.

In an interview with CBC, MacLeod explained, “We felt, because we’re a leader in this space of children and youth music, that it was our duty, maybe even our responsibility to somehow respond to this.

“Even though [the advert] is tongue-in-cheek, there’s still a tired old stereotype of youth and bad music. And so our message here is that our kids have amazing talent.”

Their response video has been watched over 60,000 times, and the orchestra have reported getting emails and messages from people all over North America complimenting them for their statement.